On May 17th, 1968, Nine people, including Father Daniel Berrigan and his brother Father Phillip Berrigan, entered a draft board and removed draft files of those who were about to be sent to Viet Nam. They took these files outside and burned them with home-made napalm, a weapon commonly used on civilians by the U.S. forces. They then awaited their arrest by authorities. The following is the statement Dan Berrigan read in court during their trial. 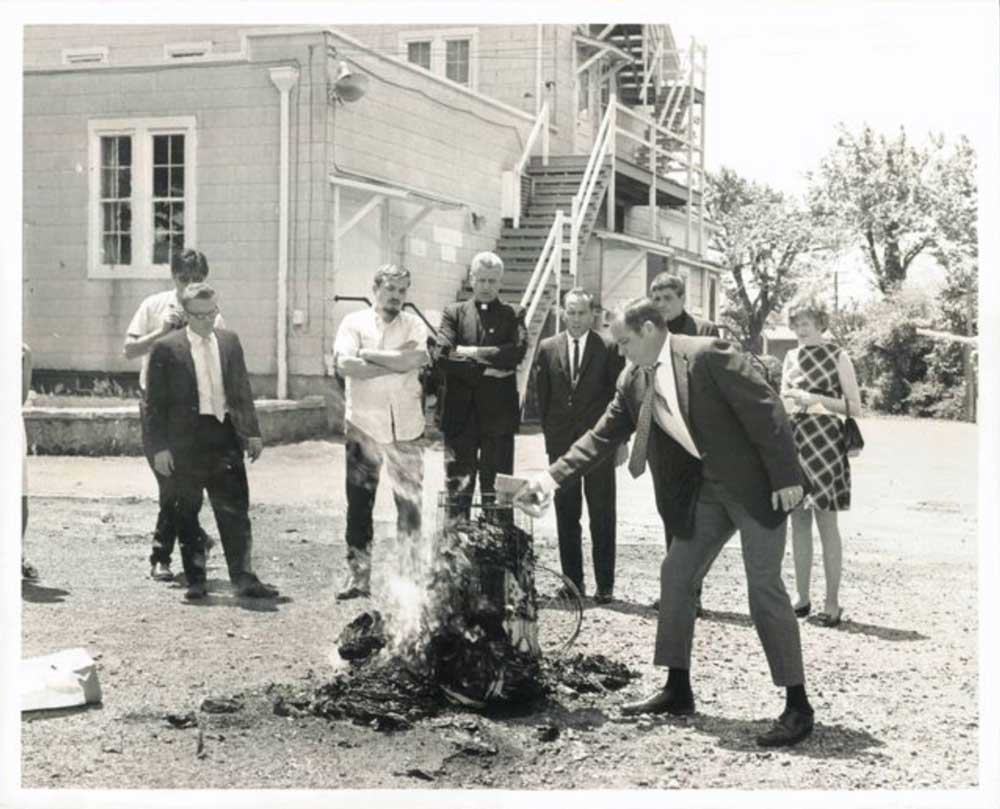 Some 10 or 12 of us (the number is still uncertain) will, if all goes well (ill?) take our religious bodies during this week to a draft center in or near Baltimore. There we shall, of purpose and forethought, remove the 1-A files, sprinkle them in the public street with homemade napalm, and set them afire. For which act we shall, beyond doubt, be placed behind bars for some portion of our natural lives, in consequence of our inability to live and die content in the plagued city, to say "peace peace" when there is no peace, to keep the poor poor, the home—less, the thirsty and hungry homeless, thirsty and hungry.

Our apologies, good friends, for the fracture of good order, the burning of paper instead of children, the angering of the orderlies in the front parlor of the charnel house. We could not, so help us God, do otherwise.

For we are sick at heart, our hearts give us no rest for thinking of the Land of Burning Children. And for thinking of that other Child, of whom the poet Luke speaks. The infant was taken up in the arms of an old man, whose tongue grew resonant and vatic at the touch of that beauty.

And the old man spoke; this child is set for the fall and rise of many in Israel, a sign that is spoken against. Small consolation; a child born to make trouble, and to die for it, the First Jew (not the last) to be subject of a "definitive solution." He sets up the cross and dies on it; in the Rose Garden of the executive mansion, on the D.C. Mall, in the courtyard of the Pentagon.

We see the sign, we read the direction: you must bear with us, for his sake. Or if you will not, the consequences are our own. For it will be easy, after all, to discredit us. Our record is bad; trouble makers in church and state, a priest married despite his vows, two convicted felons.

We have jail records, we have been turbulent, uncharitable, we have failed in love for the brethren, have yielded to fear and despair and pride, often in our lives. Forgive us. We are no more, when the truth is told, than ignorant beset men, jockeying against all chance, at the hour of death, for a place at the right hand of the dying one.

We act against the law at a time of the Poor People's March, at a time moreover when the government is announcing ever more massive paramilitary means to confront disorder in the cities. It is announced that a computerized center is being built in the Pentagon at a cost of some seven millions of dollars, to offer instant response to outbreaks anywhere in the land; that moreover, the government takes so serious a view of civil disorder, that federal troops, with war experience in Vietnam, will have first responsibility to quell civil disorder. The implications of all this must strike horror in the mind of any thinking man.

The war in Vietnam is more and more literally brought home to us. Its inmost meaning strikes the American ghettos; in servitude to the affluent. We must resist and protest this crime.

Finally, we stretch out our hands to our brothers throughout the world. We who are priests, to our fellow priests. All of us who act against the law, turn to the poor of the world, to the Vietnamese, to the victims, to the soldiers who kill and die, for the wrong reasons, for no reason at all, because they were so ordered—by the authorities of that public order which is in effect a massive institutionalized disorder.

We say: killing is disorder, life and gentleness and community and unselfishness is the only order we recognize. For the sake of that order, we risk our liberty, our good name.

The time is past when good men can remain silent, when obedience can segregate men from public risk, when the poor can die without defense. We ask our fellow Christians to consider in their hearts a question which has tortured us, night and day, since the war began. How many must die before our voices are heard, how many must be tortured, dislocated, starved, maddened? How long must the world's resources be raped in the service of legalized murder? When, at what point, will you say no to this war? We have chosen to say, with the gift of our liberty, if necessary our lives: the violence stops here, the death stops here, the suppression of the truth stops here, this war stops here.

We wish also to place in question, by this act, all suppositions about normal times, about longings for an untroubled life in a somnolent church, about a neat time-table of ecclesiastical renewal which in respect to the needs of men, amounts to another form of time serving.

Redeem the times! The times are inexpressibly evil. Christians pay conscious, indeed religious tribute, to Caesar and Mars; by the approval of overkill tactics, by brinkmanship, by nuclear liturgies, by racism, by support of genocide. They embrace their society with all their heart, and abandon the cross. They pay lip service to Christ and military service to the powers of death. And yet, and yet, the times are inexhaustibly good, solaced by the courage and hope of many. The truth rules, Christ is not forsaken.

In a time of death, some men—the resisters, those who work hardily for social change, those who preach and embrace the unpalatable truth—such men overcome death, their lives are bathed in the light of the resurrection, the truth has set them free. In the jaws of death, of contumely, of good and ill report, they proclaim their love of the brethren. We think of such men, in the world, in our nation, in the churches; and the stone in our breast is dissolved; we take heart once more.