"They Were Butchering People"

On March 16, 1968, a company of U.S. infantry entered the village of My Lai, and although they did not receive a single round of hostile fire, methodically slaughtered some five hundred Vietnamese peasants, mostly women and children. The freelance journalist Seymour Hersh heard the story, but the major media ignored his efforts to publicize it. Finally, in December 1969 Life magazine carried Ronald Haeberle's horrendous photos of GIs pouring automatic rifle fire into trenches where Vietnamese women, babies in their arms, crouched in fear. The military arrested Lieutenant William Calley, a platoon leader at My Lai, who had ordered the shootings. Many officers were involved in the incident and then the cover-up, however, only Calley received a jail sentence. His life sentence was diminished to five years by the intervention of President Nixon. He served three and a half years under house arrest and was then released. In the following recollection1, Larry Colburn, a helicopter door-gunner, who, with his pilot, Hugh Thompson, came upon the scene and stopped some of the killing, tells his story.

From Voices of A People's History, edited by Zinn and Arnove

We weren't pacifists. We did our job and when we had to kill people we did. But we didn't do it for sport. We didn't randomly shoot people. In our gun company it was very important to capture weapons, not just to legitimize your kill, but psychologically it was easier when you could say, "If I didn't do that, he was going to shoot me."

We flew an OH-23—a little gasoline-engine bubble helicopter. We were aerial scouts—a new concept. Instead of just sending assault helicopters they'd use our small aircraft as bait and have a couple gunships cover us. Basically we'd go out and cry to get into trouble. We'd fly real low and if we encountered anything we'd mark it with smoke, return fire, and let the gunships work out. We also went on "snatch missions," kidnapping draft-age males to take back for interrogation. We did that a lot in 1968.

On March 16, we came on station a little after seven a.m. The only briefing I got was that they were going to put a company on the ground to sweep through this village. Normally we'd go in beforehand to see if we could find enemy positions or entice people to shoot at us. It was clear and warm and the fog was lifting off the rice paddies. On our first pass we saw a man in uniform carrying a carbine and a pack coming out of a tree line. Thompson said, "Who wants him?" I said, "I'll take him." So he aimed the aircraft at him and got it down low and started toward the suspect. He was obviously Viet Cong. He was armed, evading, and heading for the next tree line. I couldn't hit him to save my life. We worked that area a little more but that was the only armed Vietnamese I saw that day.

After that we just started working the perimeter of My Lai—4, —5, and —6 and I remember seeing the American troops come in on slicks [helicopters]. We got ahead of them to see if they were going to encounter anything and we still didn't receive any fire. It was market day and we saw a lot of women and children leaving the hamlet. They were moving down the road carrying empty baskets. As we went further around the perimeter we saw a few wounded women in the rice fields south of My Lai—4. We marked their bodies with smoke grenades expecting that medics would give them medical assistance.

When we came back to the road we started seeing bodies, the same people that were walking to the market. They hadn't even gotten off the road. They were in piles, dead. We started going through all the scenarios of what might have happened. Was it artillery? Gunships? Viet Cong? The American soldiers on the ground were just walking around in a real nonchalant sweep. No one was crouching, ducking, or hiding.

Then we saw a young girl about twenty years old lying on the grass. We could see that she was unarmed and wounded in the chest. We marked her with smoke because we saw a squad not too far away. The smoke was green, meaning it's safe to approach. Red would have meant the opposite. We were hovering six feet off the ground not more than twenty feet away when Captain [Ernest] Medina came over, kicked her, stepped back, and finished her off. He did it right in front of us. When we saw Medina do that, it clicked. It was our guys doing the killing.

The bodies we marked with smoke—you find yourself feeling that you indirectly killed them. I'll never forget one lady who was hiding in the grass. She was crouched in a fetal position. I motioned to her—stay down, be quiet, stay there. We flew off on more reconnaissance. We came back later and she was in the same position, right where I'd told her to stay. But someone had come up behind her and literally blew her brains out. I'll never forget that look of bewilderment on her face. 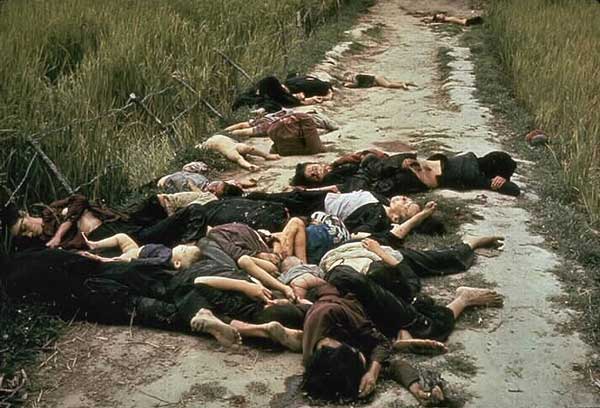 Photo taken by United States Army photographer Ronald L. Haeberle on March 16, 1968 in the aftermath of the My Lai massacre showing mostly women and children dead on a road.

Around ten a.m. [Hugh] Thompson spotted a group of women and children running toward a bunker northeast of My Lai—4 followed by a group of U.S. soldiers. When we got overhead, [Glenn] Andreotta spotted some faces peeking out of an earthen bunker. Thompson knew that in a matter of seconds they were going to die, so he landed the aircraft in between the advancing American troops and the bunker. He went over and talked to a Lieutenant [Stephen] Brooks. Thompson said, "These are civilians. How do we get them out of the bunker?" Brooks said, "I'll get them out with hand grenades." The veins were sticking out on Thompsons neck and I thought they were actually going to fight. Thompson came back and said to Andreotta and me, "If they open up on these people when I'm getting them out of the bunker, shoot 'em." Then he walked away leaving us standing there looking at each other. Thompson went over to the bunker and motioned for the people to come out. There were nine or ten of them.

We had a staredown going with the American soldiers. About half of them were sitting down, smoking and joking. I remember looking at one fellow and waving. He waved back and that's when I knew we were okay, that these guys weren't doing anything to us. No one pointed weapons at us and we didn't point any weapons at them.

Thompson called Dan Millians, a gunship pilot friend of his, and said, "Danny, I've got a little problem down here, can you help out?" Millians said sure and did something unheard of. You don't land a gunship to use it as a medevac, but he did. He got those people a couple of miles away and let 'em go. I think he had to make two trips.

We flew over the ditch where more than a hundred Vietnamese had been killed. Andreotta saw movement so Thompson landed again. Andreotta went directly into that ditch. He literally had to wade waist deep through people to get to a little child. I stood there in the open. Glenn came over and handed me the child, but the ditch was so full of bodies and blood he couldn't get out. I gave him the butt of my rifle and pulled him out. We took the little one to an orphanage. We didn't know if he was a little boy or little girl. Just a cute little child. I felt for broken bones or bullet holes and he appeared to be fine. He wasn't crying, but he had this blank stare on his face and he was covered with blood.

The only thing I remember feeling back then was that these guys were really out for revenge. They'd lost men to booby traps and snipers and they were ready to engage. They were briefed the night before and I've heard it said that they were going in there to waste everything. They didn't capture any weapons. They didn't kill any draft-age males. I've seen the list of dead and there were a hundred and twenty some humans under the age of five. It's something I've struggled with my whole adult life, how people can do that. I know what it's like to seek revenge, but we would look for a worthy opponent. These were elders, mothers, children, and babies. The fact that the VC [Viet Cong] camped out there at night is no justification for killing everyone in the hamlet.

Compare it to a little town in the United States. We're at war with someone on our own soil. They come into a town and rape the women, kill the babies, kill everyone. How would we feel? And it wasn't just murdering civilians. They were butchering people. The only thing they didn't do is cook 'em and eat 'em. How do you get that far over the edge?