A Speech by Mary Elizabeth Lease (circa 1890)

Populist orator Mary Elizabeth Lease, who supposedly advised Kansas farmers to "raise less corn and more hell," was born of Irish immigrant parents in Pennsylvania in 1850. At the age of twenty she came to Kansas to teach school in Osage Mission, and three years later she married Charles L. Lease, a local pharmacist. After unsuccessful farming ventures in Kingman County and in Texas, the Leases and their four children moved to Wichita, where Mary Elizabeth took a leading role in civic and social activities. By 1890, her involvement in the growing revolt of Kansas farmers against high mortgage interest and railroad rates had placed her in the forefront of the People's (Populist) Party, and she stomped all over Kansas as well as the Far West and the South for the cause. She was a powerful and emotional speaker; Emporia editor William Allen White, who did not share her political views, wrote on one occasion that "she could recite the multiplication table and set a crowd hooting and harrahing at her will." More an agitator than a practical politician, by 1896 Lease had become alienated from the Populist Party, and thereafter she turned to personal interests. She divorced her husband in 1902 and spent the rest of her life with one or another of her children in the East until her death in 1933. [Source: Kansas State Historical Society] 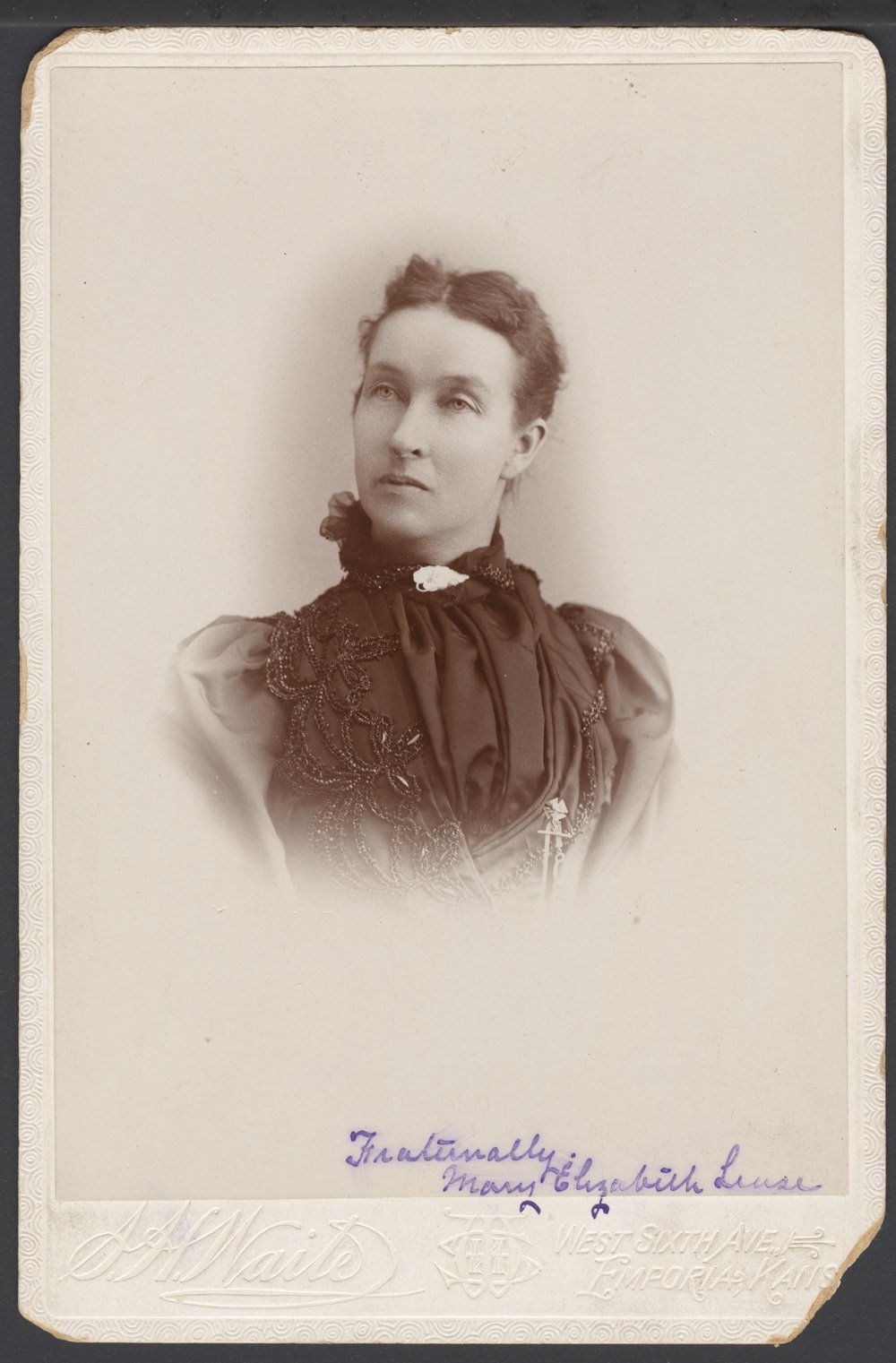 This is a nation of inconsistencies. The Puritans fleeing from oppression became oppressors. We fought England for our liberty and put chains on four million of blacks. We wiped out slavery and our tariff laws and national banks began a system of white wage slavery worse than the first. Wall Street owns the country. It is no longer a government of the people, by the people, and for the people, but a government of Wall Street, by Wall Street, and for Wall Street. The great common people of this country are slaves, and monopoly is the master. The West and South are bound and prostrate before the manufacturing East. Money rules, and our Vice-President is a London banker 1. Our laws are the output of a system which clothes rascals in robes and honesty in rags. The [political] parties lie to us and the political speakers mislead us. We were told two years ago to go to work and raise a big crop, that was all we needed. We went to work and plowed and planted; the rains fell, the sun shone, nature smiled, and we raised the big crop that they told us to; and what came of it? Eight-cent corn, ten-cent oats, two-cent beef and no price at all for butter and eggs—that's what came of it. The politicians said we suffered from overproduction. Overproduction, when 10,000 little children, so statistics tell us, starve to death every year in the United States, and over 100,000 shopgirls in New York are forced to sell their virtue for the bread their niggardly wages deny them... We want money, land and transportation. We want the abolition of the National Banks, and we want the power to make loans direct from the government. We want the foreclosure system wiped out...
We will stand by our homes and stay by our fireside by force if necessary, and we will not pay our debts to the loan-shark companies until the government pays its debts to us. The people are at bay; let the bloodhounds of money who dogged us thus far beware.


Notes
1. From vice-president Levi Morton's senate biography: "Morton's chief business was importing cotton from the South for New England's textile industry and exporting manufactured goods from the North to the agricultural South. When the Civil War broke out in the spring of 1861, his loss of southern clients forced him to suspend business. For the next decade, Morton worked to pay back his own creditors, dollar for dollar. Although the war soon stimulated the northern economy and rebuilt Morton's financial base, he saw a safer and more profitable future in banking. In 1863, he founded a Wall Street banking house, later named Morton, Bliss & Co., with a London firm called Morton, Rose. By the end of the war, Morton's bank could challenge the powerful Jay Cooke & Co. for the right to handle government transactions. In 1873 Cooke's bank failed, leaving Morton as one of the preeminent bankers in the nation."
Morton's gracious manners and generous campaign contributions made him many friends in Washington, among them President Ulysses S. Grant and Grant's strongest supporter in Congress, Senator Roscoe Conkling of New York. Morton and his British partner, Sir John Rose, expanded their financial and political fortunes by facilitating U.S. negotiations with Great Britain to settle the "Alabama Claims." During the war, Britain had violated its neutrality by allowing the construction of Confederate shipping on its soil. Senator Charles Sumner, chairman of the Foreign Relations Committee, pressed the administration to demand large-scale compensation from Britain, including the annexation of Canada, even if those claims led the two nations to war. Morton and Rose persuaded the British and Americans to accept international arbitration of their war claims; the U.S. to reduce its demands; and the British to pay $15 million in damages, for which the house of Morton, Rose acted as disbursing office. When advised that the government's position would be strengthened by using Morton, Rose as its agent, President Grant questioned whether Morton's firm was strong because of the government's patronage rather than the other way around.